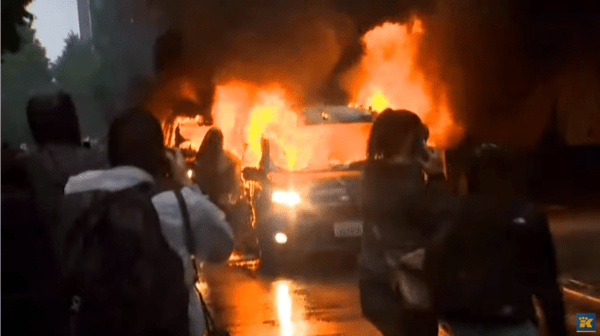 U.S.A. –-(AmmoLand.com)- When residents of Snohomish, Wash., reportedly heard rumors that the violence which erupted in Seattle over the weekend might spill into their community, several took up arms and gathered on the small town’s main street to guard local businesses from vandals, the Seattle Times reported.

Carrying sidearms and semi-auto rifles, they reportedly kept an eye on passing vehicles along First Street, underscoring a Facebook message (from Firearms Unknown in Riverside, CA) posted by Alan Gottlieb, chairman of the Citizen’s Committee for the Right to Keep and Bear Arms: “The answer to the question ‘why do you need an AR-15 and 30 round magazines?’ is on every news channel today.”

Likewise, at Pistol Annie’s pawn shop in Bonney Lake, south of Seattle, several armed citizens showed up to protect the store from the threat of looting, according to KIRO radio. Owner Melissa Denny, posted the following message on social media:

“UPDATE: I don’t know what’s worse, going through this or knowing my son is sitting at home worrying about me going through this. We are safe and the store is untouched. We’ve watched vehicle after vehicle go by with limo tint windows and many, many of the same ones over and over. I feel confident that the team of men and women who stood vigilant and will remain to do so as long as it’s necessary kept us safe tonight. I am beyond humbled and grateful for them all. There aren’t enough words. There aren’t enough thank you’s. Fighting for our 2A is certainly going to mean even more after this. Anyone who can come help stand with us would really help as it’s going to be a long few days. We desperately need a shift change.”

Get in the Fight! Tithe to our Ministry and Help Finish Recording God’s Word Seen on Every Page!
At the other end of the spectrum, however, a wealthy Seattle gun prohibitionist’s attempt at sarcasm as the riot ensued in his city’s downtown area perhaps epitomized the anti-gun mindset to exploit every tragic event to further the gun control agenda.

But in his effort to attack gun owners, venture capitalist Nick Hanauer essentially put his foot in mouth.

Just another upstanding citizen exercising his god given right to open carry an AR15. What is the problem? https://t.co/ipwvpGj4qy

Reacting to an incident involving a demonstrator who was caught briefly on camera with an AR-15 rifle next to a vandalized Seattle Police cruiser before he was disarmed at gunpoint, Hanauer tweeted: “Just another upstanding citizen exercising his god-given right to open carry an AR15. What is the problem?”

His comment was in response to an earlier tweet from someone named Naveed Jamali, who posted an 18-second video clip of the incident that originally appeared live on KOMO News.

A KOMO camera focused on the incident from several yards away as the masked demonstrator, appearing to fumble with the rifle, was rushed by a bearded man who grabbed the gun, motioned the demonstrator away, and then cleared the weapon of its visibly loaded magazine. The armed citizen turned out to be a private security guard hired by KCPQ News, and the AR rifle had been taken from the patrol vehicle before the camera started filming.

The dramatic disarm — many viewers and even a KOMO anchor called it heroic — probably prevented someone from being injured.

Hanauer is a founder and one of the primary financial supporters of the Seattle-based Alliance for Gun Responsibility, the group behind a series of Evergreen State gun control initiatives that have affected law-abiding gun owners without visibly reducing violent crime in the state. According to the FBI Uniform Crime Reports for 2015-2018, the first year following passage of Initiative 594, a “universal background check” measure, there were 209 murders in Washington, including 141 involving firearms. The next year, that dropped to 195 slayings, including 127 with guns. In 2017, the state reported 228 homicides, including 134 involving firearms, and in 2018, there were 232 murders, of which 138 were committed with firearms.

Hanauer’s gratuitous tweet brought immediate and unflattering reactions.
One man responded, “Jesus Christ this has to be the worst take I’ve seen all night.”

Another declared, “You ID10T, he STOLE it out of the patrol vehicle he probably helped vandalize and had it taken from him by a member of a security detail. Remind me what restaurants you run, so I know which ones to avoid!”

Get the BeforeitsNews Newsletter! Turn OFF all Fake News for VICTORY!
A third man observed, “This security guard was the hero, and you are the absolute zero. Thanks for coming out.”

And KTTH Radio’s Jason Rantz replied to Hanauer’s tweet: “You really are an imbecile.”

According to KCPQ reporter Brandi Kruse, who tweeted the morning after, “Our guard is former special forces. He is not a police officer. He acted on his own, after getting our crew to safety around a building.”

I want to answer some questions about the AR-15 debacle here in one thread so I don’t have to try to answer them individually. And I will also say that @SeattlePD needs to answer for why these weapons were left in police cars in the middle of the riot zone.

“We watched the first AR-15 be pulled from a cruiser, then ran along with many others as the protester fired it into the cruiser.”

The security guard apparently seized both police weapons from protesters and they were returned to Seattle police. There have been questions about why police left loaded patrol rifles in their vehicles.

The order created a zone in downtown Seattle and declared, “Within this zone, all persons are prohibited from possessing, transporting, purchasing, furnishing or selling any weapon, including, but not limited to: rocks, bottles, pipes, bats, clubs, chains, sharpened signs, shields, gas, road flares, torches, paint balls, light bulbs, any incendiary devices, pry-bars, skateboards, balloons filled with liquid, dimensional lumber with a dimension greater than ½ inch, or any other objects which can be used for infliction of bodily harm or damage to property.”

Police are authorized to confiscate any weapon on the list, or “any other implement reasonably perceived or believed to be capable of being used as a weapon found” within the boundaries set forth in the proclamation.

Noticeable by their absence on the list are firearms. Seattle is located in King County, and at last report from the state Department of Licensing, there were more than 100,000 active concealed pistol licenses in that county, roughly one-fifth of all the CPLs in Washington state.

Yet, during a press conference, Mayor Durkan did mention firearms.

Seattle, like other major cities, suffered widespread vandalism and looting in reaction to the death of George Floyd after being held to the ground by a Minneapolis police officer after being handcuffed. The officer, who was subsequently fired along with three others, placed his knee on Lloyd’s neck for some eight minutes, even after Lloyd, a black man, said he couldn’t breathe. That former cop has been charged with third-degree murder and manslaughter, according to published reports.

Commenting on the riot—what else could it be called as vehicles burned and stores were trashed and looted—veteran KIRO radio broadcaster Dori Monson declared the violence was “a stunning failure of political leadership.”

He noted that in many cities, people tried to gather peacefully to protest Floyd’s death.

“But for days, in city after city,” Monson wrote at MyNorthwest.com, “we saw those peaceful protests get hijacked by rioting and looting that had zero to do with George Floyd — in fact, all the rioting did was dishonor Floyd’s memory.

Dave Workman is a senior editor at TheGunMag.com and Liberty Park Press, author of multiple books on the Right to Keep & Bear Arms and formerly an NRA-certified firearms instructor.

Source: https://www.ammoland.com/2020/06/after-seattle-riot-armed-citizens-guard-small-town-as-antis-exploit-try-fails/
Before It’s News® is a community of individuals who report on what’s going on around them, from all around the world.

“United We Stand” Click Here To Create Your Personal Citizen Journalist Account Today, Be Sure To Invite Your Friends.
Please Help Support BeforeitsNews by trying our Natural Health Products below!