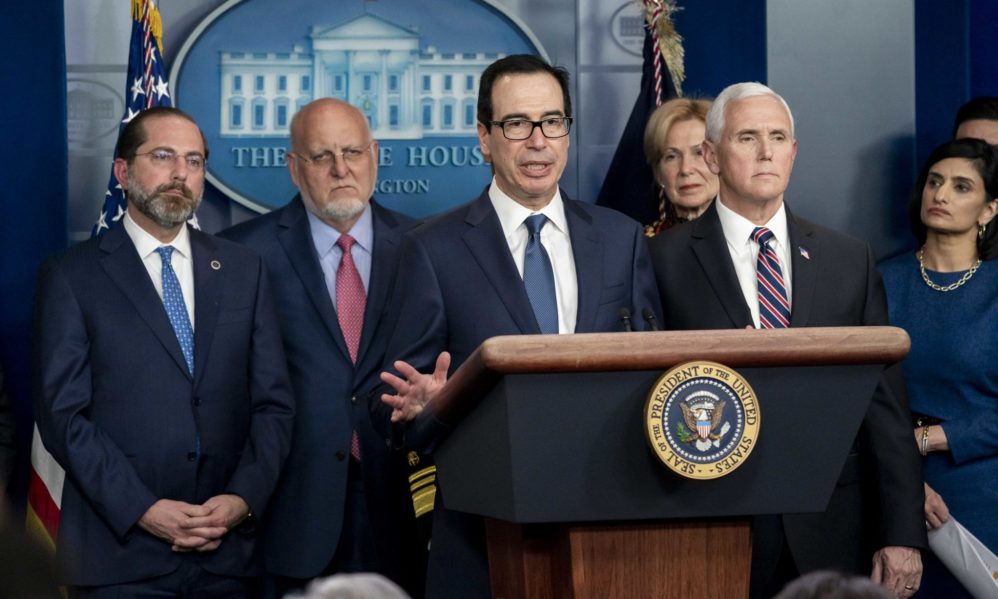 The Senate’s Plan To Save Small Businesses Is Already Failing, And Mnuchin Just Made It Worse

The details are out of Treasury now, and it looks like it isn’t going to work for a large number of small business owners after all.
Christopher Bedford
https://thefederalist.com/2020/04/08/the-senates-plan-to-save-small-businesses-is-already-failing-and-mnuchin-just-made-it-worse/

Remember the deal the president signed to save America’s small businesses from ruin during the government’s coronavirus shutdown? The one hammered out by the Senate and Secretary of the Treasury Steven Mnuchin over weeks of tense negotiation while Americans worriedly watched, hoping good news might come before a depression does? The details are out of Treasury now, and it looks like it isn’t going to work for a large number of small business owners after all.

Then, even if there was enough money, it isn’t going to work because Mnuchin crafted loan parameters that make it untenable for nearly all small businesses should the Senate’s demands not be met, which would mean the loan doesn’t qualify for forgiveness. Treasury did this last bit to protect the banks while pushing them to make loans they aren’t otherwise making. It’s just common sense, he’ll say, because local and regional banks couldn’t make a more generous deal work — a problem Mnuchin knew was coming the entire time the Senate negotiated, of course.

Here’s how it all plays out in real life. Imagine you own a restaurant with a gross revenue of $1.2 million a year, or $100,000 a month. This business employs eight people and has gross expenses of $1 million a year, or $85,000 a month. So in a normal year for your restaurant, you get to take home $200,000, minus taxes. A 20 percent profit, by the way, puts you above and beyond a lot of America’s small businesses, which will be dealing with tighter margins than the ones below.

Your monthly expenses don’t include buying goods anymore, because the government shut you down for the pandemic, but they still include rent or interest on your mortgage, the real estate tax, building insurance, maintenance and utilities, coming to $15,000 a month in your case. Then you have, say, $30,000 a month in payroll before taxes, and none of this includes your own pay. Now you need a loan.

The Senate’s loan amount is generated by multiplying a business’s monthly payroll by 2.5. The loan is meant to cover two months and can go toward your costs and utilities, but to qualify for grant forgiveness you need to retain your entire workforce and put at least 75 percent of the loan toward them.

At 2.5 times your monthly payroll, which is $30,000, you’re looking at a $75,000 loan. If this seems less than your needs, it’s because it is. You’re already in the hole because you saw a steep decline in business in March as the pandemic spread, but you didn’t know what was coming so you kept your full staff without earning near full revenue. Now you’ve got $75,000 for the next two months, but two months of payroll, rent and utilities swings in at $90,000 — $15,000 more than the loan that already doesn’t take last month into account. The city closed your restaurant the next two months too, by the way, so you won’t be earning a dime of revenue in that time.

By June, you’ve earned no income and you’re halfway through your year. If you could get roaring again right away you might make up some of that, but you’re a restaurant and unless a cure is suddenly widely available, occupancy will be severely limited by the state and revenue won’t be what it once was. It might not be profitable to open at all, given new distancing requirements and their impact on sales.

If you don’t make the Senate’s requirements, you have to pay that loan back, and thanks to Mnuchin, you’re not going to be able to do that either. In the bill, Congress set a window of a maximum interest of 4 percent and loan repayment within 10 years. This was just a window, so it was up to Treasury to set the final costs and they put them at 1 percent interest and two years to pay the bank.

In real life, that means you’re looking at beginning your third quarter in debt, limping on into the winter, losing an entire year’s profits getting your business running again, and owing nearly half of next year’s profits to the bank, all before any other loans you had to take out to keep from bankruptcy. You might have been able to spread that pain out, but two years is too little time.

And then there’s all the dictates Nancy Pelosi put into the bill in exchange for the Democrat vote. You might support the speaker and think that paid leave and health insurance requirements on small businesses are a noble policy, but you’ve got a lot on your mind and in addition to keeping everything afloat, taking this loan means you expose yourself to a lot of business costs very quickly at the onset of what might be an economic depression. Republicans gave you a tax credit to pay for it all, which is nice, but that’s at the end of the year — if you’re broke and out of business by then, it won’t mean anything.

Additionally, as your neighbors’ restaurants go under, the cost of the goods you need have increased. It’s a disaster. There’s no chance you’re making $200,000 in profits this year. Instead, with the private loans you finally pried out of the near-frozen banks, you’re in debt and left wondering what you’re doing here. The business you’ve worked for all these years just went down in a sea of shutdowns and disease, and there are jobs that pay well without all the risk and danger of being an entrepreneur and employing people in your community.

Like most other small business owners, you never wanted to own a giant company or a big house on the hill — just earn a good living working hard. It’s a sad thing, but the reality is most Americans prefer stability and assurances to risk and exposure, even with the chance of reward. That’s what makes our entrepreneurs different and what makes them special: They take the risk, and because they do, a whole lot of the rest of us have jobs, favorite places to go, sponsors for our children’s sports teams, and all the other things that make a town our town.

The above scenario is just one, and some folks might have lower or higher costs than your restaurant did, but you’re united with them in that risk you took to make America a better place for yourselves and your neighbors. Now that might be over, ended by a foreign disease, politicians who don’t get what it takes to run a business, and a Treasury secretary who only cares about Wall Street and the banks. It’s a terrible thing to see. Let’s pray Washington wises up — and hold them accountable if they don’t.

Christopher Bedford is a senior editor at The Federalist, the vice chairman of Young Americans for Freedom, a board member at the National Journalism Center, and the author of The Art of the Donald. Follow him on Twitter.
Photo Ricky Harris/The White House/Flickr
Photo White House/D. Myles Cullen/Flickr.

One thought on “The Senate’s Plan To Save Small Businesses Is Already Failing, And Mnuchin Just Made It Worse”