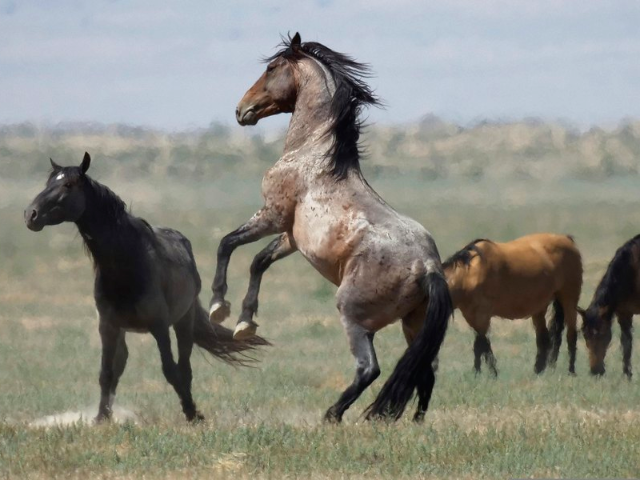 (Fifteen Horses Found Shot to Death After Allegedly Being Hunted
In this July 18, 2018, file photo, a wild horse jumps among others near Salt Lake City. The U.S. government is seeking new pastures for thousands of wild horses that have overpopulated Western ranges. Landowners interested in hosting large numbers of rounded-up wild horses on their property can now apply …AP Photo)Rick Bowmer

At least 15 horses were reportedly found shot to death Monday near a strip mining site in rural eastern Kentucky.

Authorities said the animals were discovered near the Pike and Floyd County line by U.S. Highway 23, according to the Courier Journal.

Tragically, several of the horses were yearlings or younger. Two of those killed were pregnant, but miscarried after being shot with what authorities said was a low-caliber rifle.

“This is very inhumane, and it’s a very cruel act of somebody who just apparently had nothing else to do or whatever, just to go back on a strip job and shoot down horses who were, one of them obviously was feeding, had grass in its mouth,” said Floyd County Sheriff John Hunt.

He added that the scene “looked like a battlefield for just horses.”

Tonya Conn with Dumas Rescue said it appeared the animals were hunted, according to WYMT.

“Seeing them gunned down is.. it’s beyond horrific,” she stated. “These horses were scattered in various, various places, distances from each other so they had been shot, and they’d scattered then hunted and shot down.”

The herd of 30 or more horses had roamed free in the isolated area for many years after being brought there by their owners or being born from the herd, according to NPR.

“There’s a lot of people within our community that go up there and feed them or just go see them or whatever, because, I mean, it’s beautiful back there and it’s a bunch of horses running,” said Megan Goble, who lives nearby.

Authorities said there is an estimated $2,000 reward for information regarding the incident after people from across the country began donating to raise the amount from $500.

Tuesday, the Floyd County Sheriff’s Department wrote in a Facebook post that the investigation was ongoing and thanked the community for its help and concern after such a tragic event.

“It has been heartbreaking seeing these beautiful horses killed but it had [sic] equally been heartwarming to see all the concerns and see all the support in assisting in the investigation and to give the living horses a good home. Thank you to everyone,” the post concluded.

Authorities urged anyone with information regarding the incident to call the sheriff’s department at 606-886-6171.