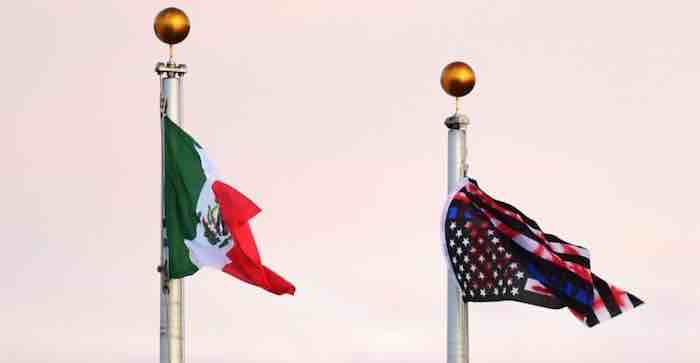 The enemy is now at our gates, resolved to finish what they have started …create chaos, take power, strip the nation of its richness, and collect the benefits of what they have accomplished. They are close, very close
Immigration The Path To Power
Ray DiLorenzo image
By Ray DiLorenzo —— Bio and Archives–July 20, 2019
https://canadafreepress.com/article/immigration-the-path-to-power

Immigration The Path To Power Our nation is in a conflict unlike any other in our history. There are powerful Marxist forces from within and without teamed up to take us down under the age-old guise of making our lives better. They will say, promise, and do anything to win. After almost one-hundred years, they have too much invested to do otherwise.

For those that see the final confrontation coming, no persuasion is necessary. For those who either don’t see it, aren’t looking, don’t understand, or choose to live in ignorance, no amount of persuasion will suffice. But, I will try anyway.

With these Socialists/Communists finding a home in the Democrat Party and their faithful voters dwindling, importing millions of new Democrat voters becomes paramount. These immigrants, unaccustomed to our meritocracy culture and values, are being promised everything former Democrats were pledged. When the Right objects, they accuse them of the mortal sin of racism.

Democrats have, in the not too distant past, railed against illegal immigration. These same politicians have now turned 180 degrees, aided by lock step voters, and youth freshly indoctrinated by academic institutions in brown-shirt activism. None choose to see the coming consequences of their actions. All they see is a weapon, a mechanism by which to achieve power and hold on to it indefinitely.

In many ways, we are in a time more dangerous than both world wars. Yes, I said that. If we had lost WW2, we would have gone home, licked our wounds and prepared for defense. Both Germany and Japan had no means or material to conduct an invasion of our country, especially with millions of Americans armed to the teeth.

Granting amnesty, and opening the borders to millions of illegal immigrants, all beholding to a political party that offers them free everything? They will vote Democrat
Our enemies have long concluded that a military victory over the United States would be impossible. As a result, a new approach was essential.

While the external opposition has slowly come to that conclusion, the forces already embedded in our government and the private Marxist institutions like Hollywood, the media, and the education system, so prevalent today, have joined forces with those malicious foreign powers. They have found our Achilles heel…our freedoms, our affinity for justice and fairness, They are now using that as the final weapon against us.

MIT says our illegal immigrant population is about 22 million. Yale says it is between 16 and 30 million. The 11 million figure so popular in the media is ridiculous and a total lie. The Democrat leadership desperately needs new Democrats to fill the empty space left by former middle-class Democrats they have long abandoned. This is not about some new healthcare program or race relations or whatever. They could not care less. It is about power. Every Democrat presidential candidate is united on this.

What would be the result of granting amnesty to 20 or 30 million illegal immigrants already here and opening the borders for an additional 40, 50, or even 100 million new immigrants, all beholding to a political party that offers them free everything? They will vote Democrat.

Not protecting our borders has been devastating to our country…in death from drugs, disease, and crime
Do these numbers sound improbable? A Gallup study in 2013 estimates that 151 million adults around the world want to come to America. That will result in 200 – 400 million additional men, women and children, the majority of which have no skills, education or speak English. If borders are opened, they will expect and get entry with all border states immediately becoming third world countries.

As a guarantee of success, the discarding of the Electoral College or the elimination of any political minority will assure their political dominance for the foreseeable future. One party rule! They could never be voted out of power regardless of the economic or social devastation they leave behind. Look at California.

History tells us that any party or group in continual power will always be corrupt and live in luxury while the rest will descend into destitution. Even a die-hard Democrat should be terrified at the prospect. This is not voting for JFK or Hubert Humphrey anymore.

Not protecting our borders has been devastating to our country…in death from drugs, disease, and crime. Our people have also suffered from deindustrialization, low wages and the costs of the uncontrolled immigration of people with no skills or means of support. Be assured, the Democrats don’t give a damn. It is the price of power.

Biggest mistake Democrats, Hard Left will make is thinking the rest of the country will live with committed Socialist Democrats in power
Our Democrat friends would say our objection is racism…nonsense! They know very well the accusation of racism goes a long way to getting what they want. In fact, they are the most racist of any political group. To them everything is about race, racial justice, or simply revenge, with white people being public enemy #1. I will not allow the racism card to stick, especially from a political party that fought for 150 years to maintain their racist policies, but now found a new, intoxicating, but nefarious approach to achieving political and social dominance.

Democrats always go too far, but the biggest mistake Democrats and the hard Left will make is thinking the rest of the country will live with committed Socialist Democrats in power and capitulate from whatever they decide.

The enemy is now at our gates, resolved to finish what they have started …create chaos, take power, strip the nation of its richness, and collect the benefits of what they have accomplished. They are close, very close.

Whether this nation, as founded, will exist or not will be determined by our response, or lack of it.