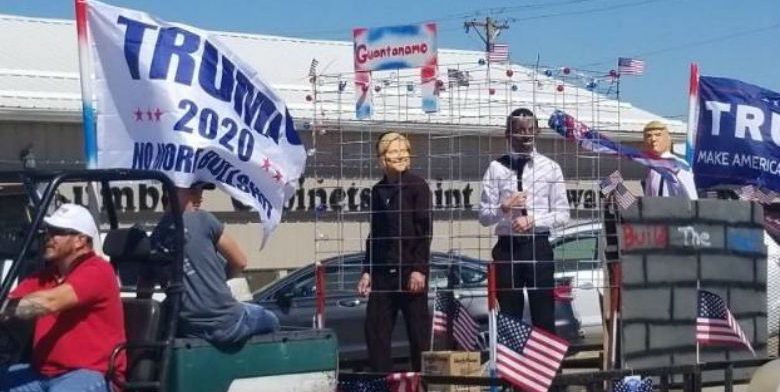 (The First Amendment isn’t there to protect ‘feelings.’)
South Dakota Mayor Responds After Settler’s Day Parade Includes Caged Obama and Hillary
The mayor is correct… this is exactly what the Independence Day celebration is all about—freedom to offend others with your personal ideas and beliefs.
by Georgette

At the fiftieth annual Settler’s Day celebration in Highmore, South Dakota, the people of the town take their constitutional rights literally.

After a float featuring a jailed Hillary Clinton and Barack Obama was seen in this year’s parade, some people were ‘offended.’

But, the Mayor of the town disagreed and explained that everyone has the right to the First Amendment!

Highmore’s 50th annual Settler’s Day is “just a wonderful time to get together and come back home,” Mayor Vikki Day said, but an interesting float at this year’s parade is giving some folks palpitations.

“I had to think about it with the mask of Obama, coming out as racist,” Jeff Damer, creator of the controversial float, told KSFY. “I just wanted to put it out there, it was just my view that they should be charged, Barack Obama and Hillary Clinton.”

The float featured a trailer with two people inside a cage wearing Obama and Clinton masks, the word “Guantanamo” spray-painted on a sign above. Another man wearing a President Trump mask stood outside the cell next to a makeshift wall with the words “Build the Wall.”

Day told the news site the city received a lot of calls and messages from people complaining about the float, but officials don’t regret allowing Damer to participate in the parade.

“My stance, and the city’s stance is that every person has a right to the first amendment, to express his or her speech, and the expressions of it, we do not regulate that,” Day said.

South Dakota blogger Kevin Woster told KSFY he was among those whose feelings were hurt from the float.

“Well when I saw that, to me it was objectionable,” Woster said, adding that he’s since spoken to Damer about the display.

The float, pictures of which were shared online, was also adorned in Trump-Pence signs, a grim reaper, and an Easter Island-style statue of President Obama.

“It’s all in fun,” Linkemeyer told the Indianapolis Star. “Laughter is the best medicine and this country needs more laughter – and the people that are offended by it, I’m sorry. Don’t come to the parade next time.”

The Farmers Fair float followed a similarly “offensive” float in Amarillo, Texas by a group called Stars and Bars during the area’s Tri-State Parade in September 2016. That float featured Obama caged in a makeshift jail with Hillary Clinton, along with a man wearing a Make America Great Again flag as a cape and American flags streaming from the tow truck, KXXV reports.

That float, accompanied by the Confederate Riders of America, drew the ire of “a lot of people in the black and Hispanic community,” as well as the NAACP for allegedly racist connotations, locals told the news site.

A couple of months before, Don Christy drove a golf cart display at the 2016 Sheridan, Indiana Independence Day Parade that featured a stuffed “African lion” on the front and Obama on a toilet in the back, above the words “Royal Flush” and “Lying African.” The golf cart was lined with jail bars, with 73-year-old Christy wearing a prison jumpsuit and blond wig behind the wheel – presumably a reference to Hillary Clinton.

Christy decorated the top of the cart with Trump campaign signs and American flags, but said the message he was trying to convey was less about politics and more about common sense.

Christy said his float was aimed at pushing back on a culture of political correctness, and he pointed out he has as much of a right to express his views and his critics have to complain about them.

“It’s time to start changing our country back a little bit,” Christy said.

“I have my right to say things,” he continued. “Isn’t that what the Fourth of July’s about? Freedom.

“I apologize to anyone I offended, which would be a total liberal.”

Regardless of how someone ‘feels’ about the displays… the very ideals of the nation mean that these things can and should exist!