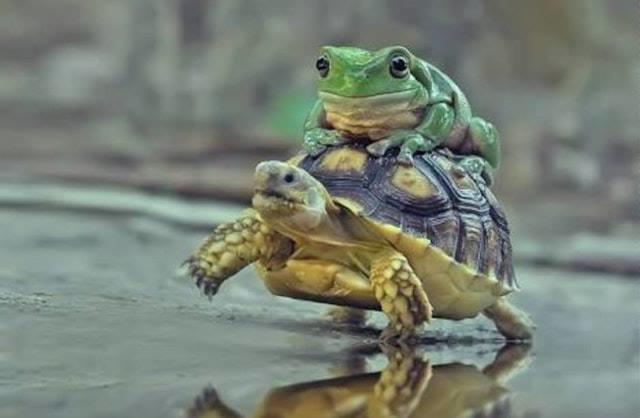 62 Heartwarming Animal Photos And The Story Behind Them
Uncategorized | October 1, 2018
An Australian green tree frog on top of an African spurred tortoise

Source: Reddit
Do frogs ride tortoises? No, or at least not habitually. There is the issue of speed — while a tortoise might offer a good surface for the rider, you can’t be in a hurry. You’d get wherever you’re going much faster if you just hopped. And speaking of the concept of “getting wherever you’re going” — there’s no way for a frog to steer a tortoise. This photo, while cute, just makes no sense. When it started showing up on photo-of-the-day/weird-news sites, some journalists called BS, and they were completely right. The frog here is an an Australian green tree frog, and he’s riding a sulcata tortoise, which is native to Africa. The photo was taken in Indonesia — when the photographer was tracked down, he admitted he buys his subjects at a local pet shop, stacks or otherwise poses them for photos, then sells the photos to wire services. Yes, the photo is cute, but it’s a completely manufactured scene — don’t believe everything you see (or read) on the internet, folks.