Kitsap Sun, Sept 2, 2014: … deaths reduce orca population to lowest level in 30 years — The endangered killer whale population in Puget Sound continues to decline… [it’s] dropped to 78… according to Ken Balcomb of the Center for Whale Research. No new calves have been born to the three pods since 2012, he said. And, alarmingly, the social structure among the orcas appears to be “splintering.”… He compiles an annual census of the population for submission to the federal government… [T]he past few years, the pods have divided themselves into small groups, sometimes staying together but often staying apart… Balcomb suggests that the primary factor for the population decline is a lack of food for the killer whales… The two orcas that are missing and presumed dead are L-53, a 37-year-old female named Lulu; and L-100, a 13-year-old male named Indigo… population has gone… from 88 in 2011 to 78 today.

Killer Whales of BC, Aug 26, 2014: After the confirmation [of the deaths] of L53 Lulu and L100Indigo are more bad news… Orca live confirmed that Plumper [age 37] has not been sighted since 8/21/14 and now is considered missing. Also Pointer [age 39] did not return with his family and is also missing. Both boys were spotted with a Peanuthead…Rest in Peace
!!! You will be missed!!! New information which unfortunately are coming directly from Port McNeil not better. Also the young I63 [age 24] is missing. She did not return with her family. R.I.P. young lady. 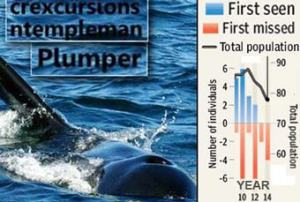 Campbell River Whale & Bear Excursions, Aug 22, 2014: A37 Plumper… this is a tough image for me to look at and share. It shows a very sick, emaciated, slow moving and shallow breathing brother of one of the most iconic families of Northern Resident Killer Whales… Sad to think maybe this will be my last image of him. Tonight Orcalive posted that as Plumper and his Brother Kaikash pushed through the tide in Blackney Pass Plumper was lagging way behind and not able to fight the current… both were pushed back and Plumper looked so exhausted he almost wasn’t even surfacing… poor guy… He drifted slowly beside us very close to the surface, and I could look down on top of him… so skinny…

Ken Balcomb, Center for Whale Research: “What we’re seeing with this weird association pattern… a fragmentation of the formal social structure, and you can see that fragmentation going further. They are often staying miles and miles apart and not interacting.”

One thought on “Killer Whales Dying along Pacific Coast!”