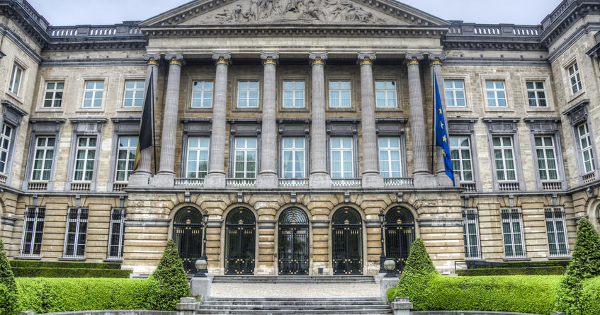 Great news. A Belgian government minister has announced that Brussels is halting its 5G plans due to health effects
The statement was made by Céline Fremault, the Minister of the Government of the Brussels-Capital Region, responsible for Housing, Quality of Life, Environment and Energy. From an interview last Friday, with L’Echo:

I cannot welcome such technology if the radiation standards, which must protect the citizen, are not respected, 5G or not. The people of Brussels are not guinea pigs whose health I can sell at a profit. We cannot leave anything to doubt.”
– Céline Fremault, Minister of the Government (Brussels-Captial Region), responsible for Housing, Quality of Life, Environment and Energy

Ms. Fremault accurately identified that a 5G pilot project is not compatible with Belgian radiation safety standards (9 V/m, or 95 mW/m2 according to this online converter), and stated that she does not intend to make an exception. (In the Building Biology guidelines, the threshold for extreme concern is 1 mW/m2. However, many government agencies still only consider thermal effects, instead of the cumulative body of thousands of peer-reviewed scientific studies.)
Perhaps with Brussels heading up the European Union, and with one of the two major 5G appeals being addressed to the EU, officials there are better informed and motivated to protect themselves.
May support increase for Ms. Fremault and all officials who are hearing the call to sanity and prioritizing the people over the technocratic oligarchy.
2-MINUTE ACTION: To send a brief note of support to Ms. Fremault, go here; and to Brussels city councilors, go here. Encourage them of the importance to keep this ban permanent, despite industry’s forthcoming pressure.
The 5G Situation in Summary
There is almost no question that a 5G-world would place us all under an unprecedented level of surveillance and control; granting unheard-of powers to soulless corporate algorithms.
That should be enough to permanently delete the agenda right there, filed under “useful technology gone bad.”
Though perhaps an even bigger question for our time is: does 5G pose a major threat to all biological life? The independent evidence overwhelmingly indicates that it does.
That is, unless you ask wireless industry sources, who own the FCC and who recently put out this CNBC propaganda/commercial in a thinly-veiled attempt to quash pushback.
The talking heads of the wireless industry even brashly admit – when forced, in a US senate hearing – that they have not done any safety studies… and they don’t plan to.
The fact is, hundreds of scientists are trying everything to sound the alarm.
One such voice, Dr. Martin Pall, the WSU Professor Emeritus whose research actually lays out the mechanism of how wireless radiation causes harm in our cells, calls 5G “the stupidest idea in the history of the world.”
However, within the corporatized halls of government, there is a well-worn pattern of voices of reason being drowned out by the frothed frenzy of technocratic corporations, who envision 5G as an unprecedented economic opportunity for the full-on commercial exploitation of reality.
But 5G pushback is starting to get viral. The compilation of truth assembled in videos on 5G like this one provides a much-needed reality-check on the shocking state of greed and depravation among the agenda-pushers in our world.
While it may sound stark, after observing this for a long while, to me it honestly now appears that those pushing this agenda are stuck in a type of hive-mind syndrome, so frenzied with dollar-signs and “us-versus-them” progress-obsessions that they are in a mode incapable of self-corrective thought. Or at the very least, incapable of seeing where all of this is obviously heading – for them and their kids, too.
When the industry sheep are being presented with an avalanche of scientific evidence for a catastrophe-in-the-making, and yet they refuse to listen and instead continue to tow the profit-pushing line, what becomes visible is the shadow-expression of utter disdain for life. That may sound harsh, but I encourage you to consider this deeply.
Perhaps it’s the global, unconscious ‘death wish’ that is at the core of the 5G push. Perhaps this is also at the core of the desire to darkly exit the human condition via AI and transhumanism. Apparently this thought-form sees its escape and salvation through technology, instead of through humanity and/or our connection with divinity.
In any case, to any sane human with normal values, the situation is indeed bewildering. Though once we get over the distress, we are called into a kind of soul-led response. Perhaps it’s first a resolve to be sovereign in our thoughts, and to be steward of our mind. Then, inspiration and true Connectedness come when we become involved in manifesting the bigger solution – the choice of a positive future.
On this path, our root challenge is to remember: the power in our individual reality is truly within each of us, because who we are is not limited to the realms of duality and separation that we experience here.
If you’re reading this, be welcomed into the humanity protector’s club.
Where You Live: The Pushback Against 5G is Going Viral
While Brussels becomes the first major international city to block 5G, dozens of local governments have passed legislation to prevent or restrict 5G rollouts due to health effects. Environmental Health Trust lists legislation from 21 local governments in the USA.
And on March 13, the Portland (OR) city council demanded that the FCC update its research on the health and environmental impacts of 5G.
Websites such as EMF Safety Network, WhatIs5G.info and My Street, My Choice provides guidelines for how to put the brakes on 5G where you live.
This industry-promoted summary of state-by-state 5G legislative actions is also useful, and gives an insight into their modus operandi.
Below is a partial list of resources where you can learn more and get involved. We applaud everyone out there who is taking the reins and leading from their heart.

Note: Several of the organizations listed below are still promoting actions limited to contacting your elected representatives and pleading for help. With that being said, there is a resounding increase in awareness that a firmer response is now required.

“UN Staff Member: 5G Is War on Humanity” (6 mins, 2019)
Documents the UN Secretary General being notified of harm from 5G and wireless proliferation.

Thanks to Dafna Tachover of We Are The Evidence for helping to break this story.

Josh del Sol Beaulieu is the creator of Take Back Your Power, a documentary about “smart” meters which won the AwareGuide Transformational Film of the Year, the Indie Fest Annual Humanitarian Award, and a Leo Award. In 2017, Josh co-founded InPower Movement, pioneering a process using commercial liability to halt harmful technology such as “smart” meters, 5G and mandatory vaccinations. Josh is passionate about human rights, consciousness, decentralized energy, safe technology and being a dad.

Disclaimer: This article is not intended to provide medical advice, diagnosis or treatment. Views expressed here do not necessarily reflect those of GreenMedInfo or its staff.