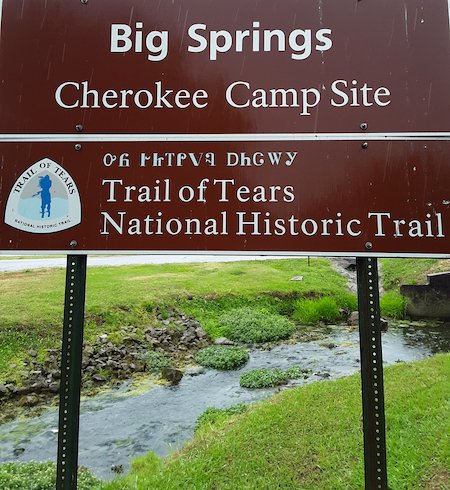 (trail of tears; Image from Shutterstock.com.)

SCOTUS delivers on US promises, at least partly, made to Native Americans after Trail of Tears
By Mark Walsh
July 27, 2020, 2:36 pm CDT
https://www.abajournal.com/web/article/scotus-delivers-on-us-promises-at-least-partly-made-to-native-americans-after-trail-of-tears

The opening words of Justice Neil M. Gorsuch’s opinion for the U.S. Supreme Court in a major case on American Indian law leaped off the page for many advocates for Native Americans.

“On the far end of the Trail of Tears was a promise,” Gorsuch wrote in McGirt v. Oklahoma, referring to the federal government’s 19th century forceful removal of the Muscogee (Creek) Nation and other tribes from their territories in the southeastern United States to what is now Oklahoma. “Forced to leave their ancestral lands in Georgia and Alabama, the Creek Nation received assurances that their new lands in the West would be secure forever.”

The court, in a 5-4 decision on July 9, held that the Creek reservation in eastern Oklahoma had never been “disestablished” by Congress, and thus, the promise embedded in a series of treaties meant their territory remains an Indian reservation, at least for purposes of federal criminal law.

“Because Congress has not said otherwise, we hold the government to its word,” Gorsuch wrote in his introduction to the 42-page majority opinion.

“When I saw Justice Gorsuch’s first line, I knew what it meant, and my heart sang,” says Jonodev O. Chaudhuri, a lawyer in Washington, D.C., and the ambassador for the Creek Nation. “I turned to my boys, who are 10 and 13, and said our home has been protected.”

Colette Routel, a professor and the co-director of the Indian law program at Mitchell Hamline School of Law in St. Paul, Minn., says the opinion “was better than we could have ever imagined. This is something we will be quoting for the next 50 years.”
Potentially half of Oklahoma affected

The decision in McGirt came after the Supreme Court had wrestled for two terms with a legal question that had divided state and federal courts in the region: Whether the state of Oklahoma could prosecute Indians accused of major crimes in Indian Country, or, under an 1885 federal statute known as the Major Crimes Act, such offenses were a matter of federal jurisdiction.

The outcome of the question hinged on whether the Creek Reservation had been withdrawn, or disestablished, by Congress in the lead-up to Oklahoma’s admission to the Union in 1907. The Creek territory covers some 3 million acres in and around Tulsa.

The court’s decision that the Creek reservation was never disestablished may well apply to the four other tribes of eastern Oklahoma—the Seminole, Cherokee, Chickasaw and Choctaw Nations. The five tribes’ total territory covers some 19 million acres where 1.8 million people reside, only 10% to 15% of whom are Native Americans.

The case involved the state’s criminal prosecution of Jimcy McGirt, an enrolled member of the Seminole Nation, for the 1996 rape of a 4-year-old Seminole girl in Broken Arrow, a suburb of Tulsa that is in Creek territory. McGirt was convicted and sentenced to 1,000 years plus life imprisonment.

In 2017, in a separate criminal case from Oklahoma that raised the same issue, the 10th Circuit U.S. Court of Appeals ruled that Congress had never disestablished the Creek reservation. The Supreme Court took up review of that case, Sharp v. Murphy, in its 2018-19 term. But with Gorsuch recused from participation in that case, likely because of his service on the 10th Circuit, the high court did not reach a resolution last term.

Meanwhile, in 2018, McGirt, by then in his 70s, filed for post-conviction relief in his case based on the 10th Circuit’s decision in Murphy. McGirt argued that his state prosecution was impermissible under the Major Crimes Act because his offense was committed within the boundaries of the Creek reservation. Oklahoma courts rejected his claim, and he appealed to the Supreme Court.

The justices granted review of McGirt’s case, in which Gorsuch would not have to recuse, and heard a fresh round of arguments on the issue during their historic round of telephone arguments in May, necessitated by the novel coronavirus pandemic.

A sympathetic vote for Indian rights

Although Gorsuch did not fully tip his hand with his questions during those arguments, Native Americans and their advocates had reason for raised hopes that he might rule on their side.

As a Westerner and a judge on the Denver-based 10th Circuit, Gorsuch had consistently ruled for tribal rights. For the 2018-19 term, Gorsuch hired as a law clerk Tobi Young, an Oklahoma-born enrolled member of the Chickasaw Nation, who was believed to be the first enrolled member of a tribe to serve as a clerk. And the term was pretty significant for Indian law, as Gorsuch joined the majority or the outcome in two 5-4 decisions in which the court upheld the treaty rights of tribes.

“Gorsuch has been a fairly reliable vote for tribal sovereignty,” says Routel, who co-wrote an amicus brief by the National Congress of American Indians in support of the Creek Nation in the McGirt case.

Gorsuch methodically went through the treaties and history that led to his conclusion that the Creek reservation still exists, while rejecting one argument after another from Oklahoma and President Donald Trump’s administration against that view.

“While there can be no question that Congress established a reservation for the Creek Nation, it’s equally clear that Congress has since broken more than a few of its promises to the Tribe,” Gorsuch said.

He added that “many of the arguments before us today follow a sadly familiar pattern. Yes, promises were made, but the price of keeping them has become too great, so now we should just cast a blind eye. We reject that thinking.”

“Today, the court holds that Oklahoma lacked jurisdiction to prosecute McGirt—on the improbable ground that, unbeknownst to anyone for the past century, a huge swathe of Oklahoma is actually a Creek Indian reservation,” Roberts wrote.

Observing that the decision may ultimately lead to the same outcome for the other four Oklahoma tribes’ territories, the chief justice said, “Across this vast area, the state’s ability to prosecute serious crimes will be hobbled and decades of past convictions could well be thrown out. On top of that, the court has profoundly destabilized the governance of eastern Oklahoma.”

Roberts said the decision creates uncertainty for any area of government that touches Indian affairs, including zoning, taxation, family law and environmental law. The state and several of its allies raised similar concerns in their briefs.

On the day of the decision, Oklahoma Attorney General Michael J. Hunter, a Republican, seemed to downplay the potential ramifications. He issued a statement with the five tribes emphasizing that they had made “substantial progress” toward a plan to ask Congress and the U.S. Department of Justice to resolve any criminal and civil jurisdictional issues created by the decision.

Within two weeks, however, the Creek and Seminole tribes had stepped back from that process, and Hunter sounded a bit frustrated in an interview.

“The reality is, I never thought that the court would, in a flash cut fashion, dismantle 113 years of practice,” says Hunter, referring to the year of Oklahoma statehood. “It is in the state’s and the tribes’ best interest to avoid the uncertainty and chaos brought by the decision.”

Hunter says the fact that the decision provided no transition period created a crisis atmosphere for the many practical issues raised. “The opinion is an incredible logistical challenge for the state and the tribes,” he says.

David W. Hill, the principal chief of the Creek Nation, said in a July 17 letter to the tribe’s citizens that “collaboration between federal, state, and tribal governments is critical and necessary” following the McGirt decision, but that collaboration “does not require congressional legislation” and “the Muscogee (Creek) Nation will oppose any legislation that diminishes the Nation’s sovereignty.”

Chaudhuri, the Creek Nation ambassador, a formal tribal position, says the tribe believes that no action in Congress is necessary. “There’s nothing that can’t be done through intergovernmental agreements and cooperation,” he says.
‘Harder to bury historic injustice’

M. Todd Henderson, a University of Chicago law professor who teaches American Indian law, said in an interview and in an op-ed in the Wall Street Journal that he found some irony in the tribe’s victory being celebrated by progressives.

Tribes are hardly bastions of liberal thought, he says, and the Five Tribes of the Oklahoma brought enslaved people with them on the Trail of Tears and aligned with the Confederacy during the Civil War, a point emphasized by Roberts in his dissent as well.

Henderson says that while on the surface the court’s decision is a win for tribal sovereignty, the significant role of the federal government under the Major Crimes Act makes matters more complicated.

“The weird thing for the tribe is that this victory doesn’t get them” to exclusive jurisdiction over their affairs, he said. “They have jurisdiction over eastern Oklahoma, but they are hamstrung by this federal law. They have a half-win, and this half-win may be worse.”

Lindsay Robertson, a law professor at the University of Oklahoma and the director of the Center for the Study of American Indian Law and Policy, says he doesn’t doubt there will be some challenges in implementing the decision, but that should not diminish the historic nature of it.

“One of the potential legacies of the McGirt case that may work to the advantage of tribes is that the subsequent history” of developments often cited against the tribes’ interests “may no longer matter,” says Robertson, who joined an amicus brief in support of the Creek. “It will be harder to bury historic injustice by saying, ‘Well, a lot has happened since.’”