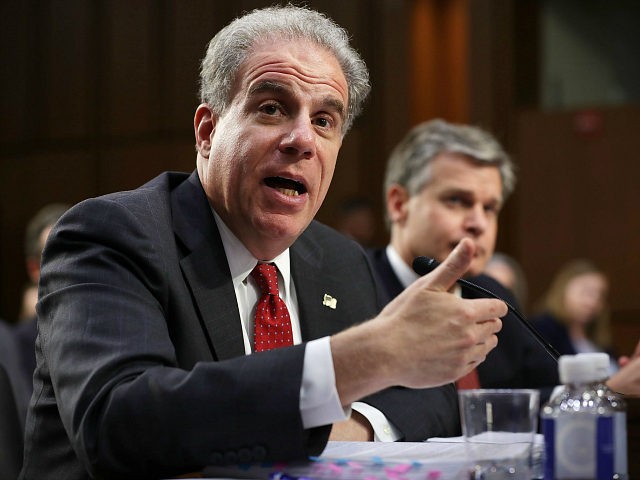 Michael Horowitz, the U.S Department of Justice’s (DOJ) inspector general (IG), said Thursday that he is almost done finalizing the report into possible abuses of the Foreign Intelligence Surveillance Act (FISA) ahead of the 2016 presidential election.

Horowitz made the revelation in an October 24 letter addressed to House and Senate leaders.

The IG anticipated that the report would be released to the public with “a few redactions,” adding:

Given that our draft report is lengthy, and concerns sensitive national security and law enforcement matters, we understood that it would take the Department and the FBI some time to work through and appropriately mark the entire report. I can report to you that the [finalizing] process is ongoing and nearing completion, and we are working through these issues constructively with both the Department and the FBI.

After we receive the final classification markings from the Department and the FBI, we will then proceed with our usual process for preparing a final report, including ensuring that appropriate reviews occur for accuracy and comment purposes. Once begun, we do not anticipate the time for that review to be lengthy.

Several news outlets obtained Horowitz’s letter. The DOJ IG has been conducting a parallel probe to the one focused on the origins of the Russian collusion hoax, which recently became a criminal investigation. Both investigations are related.

In March 2018, Horowitz launched the review of FISA abuses at the behest of lawmakers and then-Attorney General Jeff Sessions. Horowitz examined whether the FBI violated FISA when it sought surveillance of Carter Page, a former Trump campaign aid, back in 2016 in relation to the “Russian collusion” probe.

Partially redacted versions of the FBI’s FISA warrant to surveil Page revealed that the FBI relied on a largely discredited dossier written by British ex-spy Christopher Steele that was funded by the Hillary Clinton campaign and Democratic National Committee. But, the FBI apparently obscured that fact in its warrant application, telling the secret court only that the dossier was prepared at the behest of an unidentified presidential campaign.

The surveillance of Page prompted Trump and his Republican allies to accuse the Obama administration of spying, or even committing treason, against former top law enforcement officials. In April, Attorney General William Barr told lawmakers he believes the FBI spied on the Trump campaign.

“As soon as Horowitz is done with his review of the FISA warrant application, the counterintelligence investigation, the Trump campaign, we’ll have a hearing in public with Horowitz and we’ll call a bunch of witnesses,” Sen. Lindsey Graham (R-SC) told the Fox Business Network last Sunday.

President Trump has been anticipating the DOJ IG’s report.

“The IG report is going to come out soon, and we’ll see what happens,” Trump told reporters last week.

Trump has the authority to declassify and release the DOJ IG report. Horowitz’s letter announcing the prospective release of the FISA abuse probe report came amid House Democrats’ impeachment investigation.