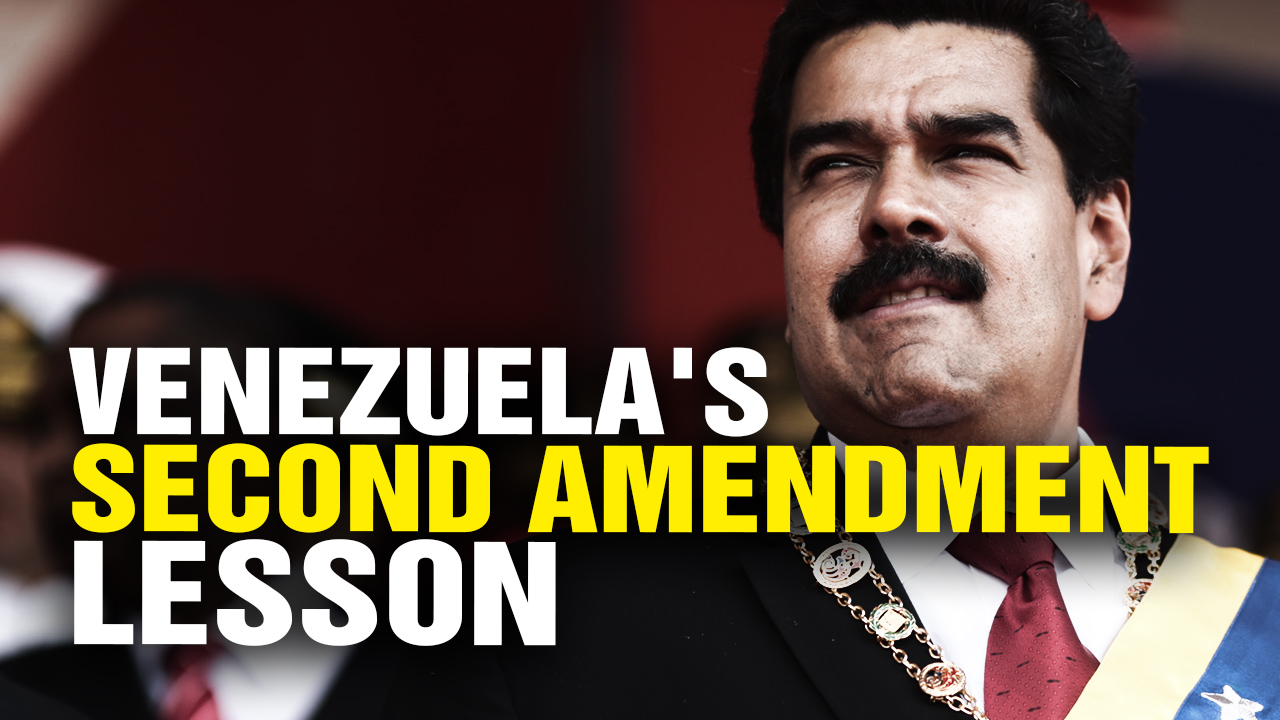 (Image: Massive humanitarian crisis in Venezuela could have been PREVENTED if the people hadn’t surrendered all their guns to a corrupt government regime)

Massive humanitarian crisis in Venezuela could have been PREVENTED if the people hadn’t surrendered all their guns to a corrupt government regime
Wednesday, December 19, 2018 by: JD Heyes
https://www.naturalnews.com/2018-12-19-massive-humanitarian-crisis-in-venezuela-could-have-been-prevented.html

(Natural News) For anyone interested in how to destroy a once-prosperous country and enslave the people, Venezuela provides an object, ongoing lesson.

After more than a decade of failed socialist policies, the country is on the brink of implosion as its hungry, desperate citizens — those who haven’t already fled — appear on the verge of completely unwinding what remains of the civil society there.

Worse, there isn’t much Venezuelans can do at this point to stop it without dying in large numbers.

In recent days, Fox News published a story that makes the case for gun rights including interviews with an exiled dissident from the South American oil-rich nation who has been watching his fellow citizens have their rights and their future crushed by a tyrannical, authoritarian leader who made sure they could not mount a serious resistance:

As Venezuela continues to crumble under the socialist dictatorship of President Nicolas Maduro, some are expressing words of warning – and resentment – against a six-year-old gun control bill that stripped citizens of their weapons.

“Guns would have served as a vital pillar to remaining a free people, or at least able to put up a fight,” Javier Vanegas, 28, a Venezuelan English teacher now exiled in Ecuador, told the network. “The government security forces, at the beginning of this debacle, knew they had no real opposition to their force. Once things were this bad, it was a clear declaration of war against an unarmed population.” (Related: Venezuela nears total collapse as government now unable to provide food, water, electricity and protection for citizens.)

Our founders saw Venezuelan tyranny coming
The effort to disarm Venezuelans began in earnest in 2012 under then-President Hugo Chavez. Under his direction, the National Assembly passed the “Control of Arms, Munitions and Disarmament Law,” with the goal to “disarm all citizens.”

The law took effect the following year and only received minor pushback from a few pro-democracy opposition leaders. It banned the legal, commercial sale of all guns and ammunition to everyone except government organizations and entities (police, military, etc.).

For a time, Chavez ran a program that encouraged armed citizens to turn in their guns voluntarily in exchange for electrical goods. But in 2014 only a handful of guns — 37 — were turned in. The vast majority, or more than 12,500 firearms, were taken by force.

Also that year, as Nicolas Maduro succeeded Chavez after his death, he continued the socialist policies begun by his predecessor. And as the country reeled from economic malaise that turned into full-blown decline, Maduro nevertheless spent $47 million enforcing the Chavez gun ban, “which has since included grandiose displays of public weapons demolitions in the town square,” Fox News reported.

One former gun store owner told the network that he can now only sell fishing supplies since the ban took effect. He added that he can’t sell any weaponry whatsoever, and that includes slingshots. Even BB ammo and airsoft rifles and pistols can only be issued to police and military personnel. Anyone caught carrying or selling a firearm now faces 20 years in prison.

“Venezuelans didn’t care enough about it. The idea of having the means to protect your home was seen as only needed out in the fields. People never would have believed they needed to defend themselves against the government,” said Vanegas, the network reported.

“If guns had been a stronger part of our culture, if there had been a sense of duty for one to protect their individual rights, and as a show of force against a government power – and had legal carry been a common thing – it would have made a huge difference,” he told Fox News.

This is exactly why our founders wrote the Second Amendment and included it as one of the first contained in the Bill of Rights. Because they understood that governments, historically, have trended toward tyranny when there is nothing standing in the way.

Read more about the collapse of Venezuela at Collapse.news.