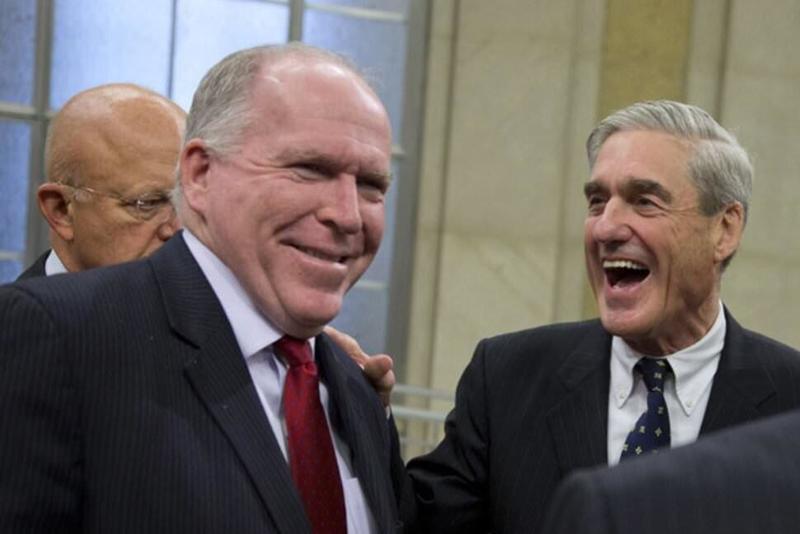 9-11, The Attack on America – 18 years later
Radiopatriot
The Radio Patriot

Since traditional news outlets want this story to stay buried, it’s up to us to spread it. Things don’t get too much more disturbing than this.

Robert Mueller – pitched as an incorruptible beacon of justice when he was tasked with (unsuccessfully) hunting down ties between Donald Trump and Russia – was nothing more than a hatchet man for the deep state, who participated in a coverup of Saudi Arabia’s role in 9/11 according to a new report by the New York Post‘s Paul Sperry – citing former FBI investigators and a new lawsuit by 9/11 victims.

According to Sperry, Mueller stonewalled after FBI agents discovered evidence of “multiple, systemic efforts by the Saudi government to assist the hijackers in the lead-up to the 9/11 attacks,” while the former FBI director allegedly “covered up evidence pointing back to the Saudi Embassy and Riyadh — and may have even misled Congress about what he knew.”

“He was the master when it came to covering up the kingdom’s role in 9/11,” said Sharon Premoli, a September 11th survivor who was pulled out of the rubble of the World Trade Center, and is now suing Saudi Arabia as a plaintiff in a new lawsuit.

“In October of 2001, Mueller shut down the government’s investigation after only three weeks, and then took part in the Bush [administration’s] campaign to block, obfuscate and generally stop anything about Saudi Arabia from being released,” she added.

“Any letting the Saudis off the hook came from the White House,” said former Agent Mark Rossini, adding “I can still see that photo of Bandar and Bush enjoying cigars on the balcony of the White House two days after 9/11.”

Speaking with multiple FBI case agents, Sperry lists a series of incidents describing Mueller ‘throwing up roadblocks’ in front of his own investigators – “making it easier for Saudi suspects to escape questioning.” And according to the lawsuit, Mueller “deep-sixed what evidence his agents did manage to uncover.”

Time and again, agents were called off from pursuing leads back to the kingdom’s embassy in Washington, as well as its consulate in Los Angeles, where former FBI Agent Stephen Moore headed a 9/11 task force looking into local contacts made by two of the 15 Saudi hijackers, Moore testified in an affidavit for the 9/11 lawsuit. He concluded that “diplomatic and intelligence personnel of Saudi Arabia knowingly provided material support to the two hijackers and facilitated the 9/11 plot.” Yet he and his team were not allowed to interview them, according to the suit.
In Washington, former FBI Agent John Guandolo, who worked terror cases out of the bureau’s DC office, said then-Saudi Ambassador Prince Bandar “should have been treated as a terrorist suspect” for giving money to a woman who funded two of the 9/11 hijackers. But he was never questioned either, Guandolo said.
Instead, Mueller obliged what Guandolo called an “outrageous request” from Bandar within days of the attacks to help evacuate from the country dozens of Saudi officials, including at least one Osama bin Laden relative on the terror watch list. Mueller assured their safe passage to planes, using agents as personal escorts, according to FBI documents obtained by Judicial Watch. Agents who should have been interrogating the Saudis instead acted as their bodyguards.
In 2002, Mueller prevented agents from arresting the Saudi-sponsored al Qaeda cleric who privately counseled the Saudi hijackers, said Raymond Fournier, an agent with the Joint Terrorism Task Force in San Diego at the time. “He was responsible for vacating the arrest warrant for Anwar al-Awlaki for passport fraud,” Fournier said. He even ordered agents who detained the fiend at JFK to release him into the custody of a “Saudi representative,” Fournier said. The FBI closed their investigation of Awlaki, who was allowed to leave the US on a Saudi plane. “Shortly thereafter, the Fort Hood shooting occurred and Awlaki’s fingerprints were all over that incident,” said former FBI Agent Michael Biasello, who helped work the Texas terror case.
At the same time, Mueller removed a veteran agent from investigating a tip that an adviser to the Saudi royal family had met with some of the Saudi hijackers at his home in Sarasota, Fla., effectively killing the case, according to the lawsuit. The home was suddenly abandoned two weeks before 9/11.
Mueller even tried to shut down a congressional investigation into the Saudi hijackers and their contacts in LA and San Diego, said Bob Graham, who led the joint inquiry as Senate Intelligence Committee chair. “The strongest objections” to his staff investigators visiting FBI offices there came from the FBI director himself, said Graham, in a 2017 interview with Harper’s magazine. Among other things, Mueller refused their demands to question a paid FBI informant who roomed with the hijackers and even moved him to a safe house where they couldn’t find him, Graham said. Mueller, with the White House, redacted 28 pages detailing Saudi-9/11 ties from the congressional report.
He also gave testimony to Congress that was, at the very least, misleading. In an October 2002 closed-door hearing, Mueller claimed he found out about Saudi-9/11 connections only as a result of the joint inquiry’s investigative work: “[S]ome facts came to light here and to me, frankly, that had not come to light before.” Only, Moore said he gave Mueller “daily” briefings on such connections in 2001. Mueller also testified the hijackers “contacted no known terrorist sympathizers in the United States,” even though the FBI’s own case files showed they had contact with at least 14 terrorist suspects and sympathizers in the US prior to 9/11, including some working for the Saudi government. (In later testimony, he tried to walk this back, insisting he “had no intent to mislead.”)
***

“He’s a villain, and an arrogant one to boot,” said former FBI agent Mark Wauck, who called Mueller a “servant of the deep state.”