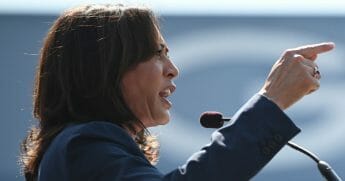 Pro-Abortion Kamala Harris Lectures Trump: ‘A Society Is Judged Based on How It Treats Children’
By Cade Almond
Published September 6, 2019 at 2:34pm

Pro-Abortion Kamala Harris Lectures Trump: ‘A Society Is Judged Based on How It Treats Children’

The pro-abortion Democratic candidate had the gall to lecture the president on his treatment of children, despite her longstanding opposition to protecting the lives of the most innocent among us.

Harris launched her attack in a re-tweet of a Bloomberg article that criticized the president for his “policy of separating migrant children from their families” that resulted in minors suffering “fear, post-traumatic stress and other mental health problems.”

She captioned the tweet with an ominous warning for the Trump administration, saying it will be judged for how it treats children.

“A society is judged based on how it treats children,” she wrote. “This administration will be judged harshly.”

A society is judged based on how it treats children. This Administration will be judged harshly. https://t.co/OdeC8o1lGe

Apparently Harris failed to see the glaring hypocrisy of her words.

The liberal senator has an atrocious history when it comes treatment of children, actively advocating for their destruction in the womb.
Do you think Harris is a hypocrite?
Yes No
Completing this poll entitles you to The Western Journal news updates free of charge. You may opt out at anytime. You also agree to our Privacy Policy and Terms of Use.

In the Senate, she voted against the Pain-Capable Unborn Child Protection Act, which would have outlawed abortions performed after 20 weeks of gestation.

She even voted against the Born-Alive Survivors Protection Act.

Her new “Medicare for All” plan includes “comprehensive reproductive health care services” under a list of “medically necessary services.”

Restricting access to safe, legal abortion puts women’s lives at risk. We need your voice now, more than ever, in this fight. Join me in splitting a donation to @yellowfund, @ClinicVest, @abortionfunds, and @ARC_Southeast now: https://t.co/jESkDv4whb

RELATED: Planned Parenthood Claims ‘Size of Your Body Doesn’t Define Your Worth,’ Misses the Irony

Yesterday, I announced my plan to go on offense and protect every woman’s constitutional right to abortion. It’s time we trust women to be in charge of their future. https://t.co/DkPGxODslJ https://t.co/7navFRy1hG

These bans won’t end abortion; they will just end safe and legal abortions.https://t.co/OLVbzzaCLh

A society will be judged by how it treated its children — and if the 50 million abortions since Roe v. Wade are any indication, we will be judged very harshly.

We are committed to truth and accuracy in all of our journalism. Read our editorial standards.

One thought on “A society is judged based on how it treats children. This Administration will be judged harshly. https://t.co/OdeC8o1lGe — Kamala Harris (@KamalaHarris) September 5, 2019”