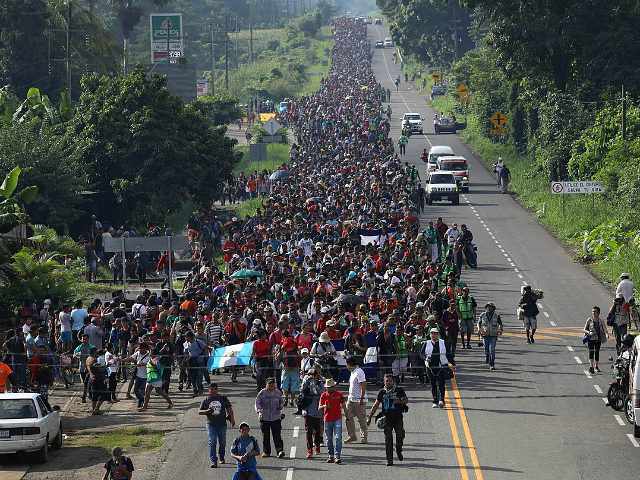 State Department Pledges $10 Billion to Develop Central America, Southern Mexico
CIUDAD HIDALGO, MEXICO – OCTOBER 21: A migrant caravan, which has grown into the thousands, walks into the interior of Mexico after crossing the Guatemalan border on October 21, 2018 near Ciudad Hidalgo, Mexico The caravan of Central Americans plans to eventually reach the United States. U.S. President Donald Trump …
By Penny Starr
https://www.breitbart.com/national-security/2018/12/18/state-department-pledges-10-billion-to-develop-central-america-southern-mexico/

The U.S. State Department announced on Tuesday that it is pledging more than $10 billion to help strengthen the economies of Central America and Southern Mexico to stem the flow of thousands of migrants surging into the country.

“The United States pledged $5.8 billion in aid and investment Tuesday for strengthening government and economic development in Central America and another $4.8 billion in development aid for southern Mexico,” the Associated Press (AP) reported.

“The U.S aid aims to promote better security conditions and job opportunities as part of a regional plan to allow Central Americans to remain in their countries and not have to emigrate,” the AP reported.
Breitbart TV
You’ll Never Guess What Mexico Just Did When New Caravan Approached Their Border

“In sum, I think this is good news, very good news for Mexico,” Ebrard said in the AP report.

“I have a dream that I want to see become a reality … that nobody will want to go work in the United States anymore,” newly inaugurated President Andres Manuel Lopez Obrador said at a press conference ahead of the announcement.

“The United States and Mexico today commit to strengthen and expand our bilateral cooperation to foster development and increase investment in southern Mexico and in Central America to create a zone of prosperity,” a joint Mexico/U.S. declaration released by the State Department on Tuesday said. “Both countries recognize the strong links between promoting development and economic growth in southern Mexico and the success of promoting prosperity, good governance, and security in Central America.”

“The United States welcomes the Comprehensive Development Plan launched by the Government of Mexico in concert with the governments of El Salvador, Guatemala, and Honduras to promote these goals,” the declaration said. “The United States and Mexico will lead in working with regional and international partners to build a more prosperous and secure Central America to address the underlying causes of migration, and so that citizens of the region can build better lives for themselves and their families at home.”

The declaration said Mexico would also do its part to make the plan succeed.

“The government of Mexico has announced the largest development commitment in decades in southern Mexico to include $25 billion over five years,” the declaration said.

In addition to public funds, the state department said private investment is part of the strategy.

The multi-faceted plan is still unfolding. The State Department also announced a “Cabinet-level Meeting and High-Level Taskforce” involving Mexico and the U.S. in January 2019 to “agree on a strategic framework for our cooperation in Central America to address root causes of migration.”

It was not immediately clear how much of the investment announced represented new funding. A spokesman for Ebrard told Reuters he understood that $2.5 billion of the pledges to develop Central America was part of “fresh commitments,” Reuters reported.

A bilateral business summit between the two countries will also take place next year.

The Trump administration is requesting an additional $180 million in bilateral assistance for the region in its FY (fiscal year) 2019 appropriation request, according to the State Department, but not all funding will come from taxpayers, as previously noted and as AP reported.